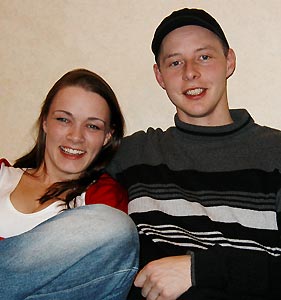 Yesterday, one of my very good friends came around. It's his birthday on Sunday.

Anyway, I figured putting up a picture of him and me in the honor of this special day for him, would be a nice gesture, so

Every now and then, he sends me an text message asking me to give him a call or send him an sms to confirm that I'm "that" Marsha.
Oddly enough people don't always believe him when he tells about him and me being friends. When I think of the cause of this disbelieve, I can't help feeling a bit silly, though mildly flattered.

Well, Steven, this should clear all doubt, if needed. Next time it happens, just tell them to check out this entry in my journal.
Either way, I'm happy to be remembered in such a way. Kinda makes me feel all fuzzy and warm inside... what I've done until now still matters... doesn't it?

I forgot to tell you about dreadful thing that happened to me last weekend.
I had been watching the series "24" with Kiefer Sutherland.
And I missed the last episode. How about that!
Misserable.

Anyone around here in Belgium recorded it? Just kidding. I'll get the video somewhere. Sometime.

Got to go something else is on tv. I'll tell you about this series too sometime.

Yesterday evening I went out skiing. Indoor skiing.
Must have been something like 10 years since I last was on skis. But I think I did fairly well. I don't know. I don't think I was all that bad. Maybe a little rusty when it comes to technical skills but at the end of the hour I did get the hang of it.

It's a shame it's so expensive, it's fun... even though it was a bit too crowded after a while. I don't dislike snowboarders, but I do dislike people sitting next too eachother in the middle of the track with a snowboard attached to their feet. It's not that they fell. They were just chatting.

Anyway, today, the day after, I hurt. My back hurts, my arms hurt, everything hurts etc. It 'll pass. Hopefully. lol.

I think I'm going to skate to get some bread. At least that way I get some excercise.

Finally, all the dishes from the New Year's Eve party are done. Finally, I have some time to write my first entry for the year.
Hopefully, all of you enjoyed New Year's Eve.

Happy New Year to everyone. I hope you'll all see your wishes for 2004 come true and that you all have the possibility to enjoy every single day.

For the coming year, for myself, I hope to be able to hit the curve balls life throws me better than I have before.

That's about all I can say for now.