And I thought no one read this online journal of mine !!!! lol Apparently some people do read this.
Someone must have read my post in which I explicitely stated that I wouldn't quit EVER. lol.... And I'm still 100% sure of that... even more so after getting this in my mailbox today:

To the person writing this: "Thank you for your encouragement. This kind of e-mails even makes me more persistent, more sure of myself, gives me more strength to continue what i'm doing."

I feel sorry for people who put time and effort into this sort of e-mails. Seriously... lol this just makes me laugh really.

As I stated before, it only makes me more sure of what I'm doing.
lol

Within the last couple of weeks I have received a considerable amount of e-mails, which of course makes me happy, but I haven't been able to answer all of them yet.
I just want you all to know that I am still going to answer your e-mail. All I ask of you is a little bit of patience, because I've been pretty busy lately too.
As I mentioned in one of my previous entries, I try answer most e-mails, especially if the explicitely ask for a reply. That hasn't changed yet, so just grant me a bit of time, ok? Thank you. :)

Love,
Marsha
p.s. Clark J., if you read this, your e-mails will also get a reply soon (probably tomorrow).

If Spammers Were Honest
Are you interested in making $$$$ fast? Here is a real, simple method. It works great - I have done this several times. You need not buy anything; there is no money to invest - no money to lose! Try it now! Follow these simple instructions: Hold down the shift key and hit the 4 key four times.
-received from www.mydomain.com

Next entry will be later tonight.

This morning I woke up with a "nice symphony" of a hammer drill. I decided to put on headphones... loud... Unfortunately, when someone is using a hammer drill on the outside of your apartment, it's not so very likely that you will able to ignore it as if it's not there.

The noise is hardly audible (I can still hear it through the music and my headphones are playing at maximum volume.) Aside from the incredibly enervating noise, there is now something that imposes itself onto my senses. The floor is trembling. I considered tapping my feet to the music so I wouldn't notice the floor trembling beneath my feet... but there's no way that I can find a song with a tempo as fast as that of the hammer drill.

This mix that I'm listening to on launch.com right now is soothing for my nerves though. It's a part of Jonathan Peters' Mix called "Live with Jonathan Peters 2002"
It has a really hard beat, tight rhythm. The titles of the tracks being mixed are: The Skank (Original Mix) / Wonderland (S-Man's Dark Tribe Mix) - Northern Monkeys / The Psychedelic Waltons. I like this kind of music too.

Don't say it! "Oooh! Marsha likes other music than the genre she sings in too!!!"
Yes, I do.
And I'm proud to say that I like most kinds of music because the fact remains:
"Good music is just good music" I'm not so narrow minded as to block out all other genres of music out of my life. NO WAY! I love music in all of its forms... uhm... well most forms anyway. My love for music is not limited to one genre. I like things like The Beatles, Tiësto, Craig David, Lee Ann Rhimes, The Rolling Stones, Push, Phil Collins, Madonna, Paul Oakenfold, Sheryl Crow, Moby, Eminem, Hex Hector, TLC, The Pixies, BT, Marvin Gaye, Ferry Corsten, Loïs Lane, The Cure, Riva, Aretha Franklin, John Hiat, Marco V, Alanis Morissette, Chicane, Prince, Anouk, Jan Johnston, ETC.

I hope the contrast is clear??? lol heheh. They are mentioned in no particular order, and my taste in music is not at all limited to these artists only. I'm not saying that I like ALL their songs... let's say that I like at least three songs of every artist mentioned above. This doesn't mean I'm not "picky" when it comes to music... I'm am absolutely very picky! I only like music of artists who can be original, without crossing the limit, who show creativity, talent, love for music and love for the crowd (and I don't like artists with an "attitude" if you know what I mean).

I'm considering putting some sort of chart on my site. A list of my current favorites... Maybe some sort of list containing some of my all time favorites, maybe in categories... I don't know.... Don't know if it's interesting enough though. There are already sooooo... many charts on the net.

I have to go now. I've got some things to take care of. I'll write to you soon.

Today I was watching music videos on launch.com
I started watching Madonnas videos. Jeezzz, she really made a lot of videos  not to mention the amount of concerts and performances shes done. Madonna's website also shows a nice collection of magazine covers she's been on... not to mention the tons of different looks she's had!!!

Anyway, I came across the music video of her song called Dress you up. Now, THAT was a walk down memory lane for me. Seems like ages ago, but I can clearly remember rehearsing this song as a little kid. Studying all the steps and movements she makes in that video lol its too funny thinking about it now.
Let me share a picture with you here. This is me.
(just click the thumbnail for a pop-up with a larger version)

My mom had made me a Madonna outfit for this contest. I just LOVED that outfit. It had a cross of (imitation) diamonds on it. I'm not wearing my long black gloves without fingers in this picture, but at the performance I was fully Madonna dressed. lol I guess you could say I was dressing up to perform Dress you up.
I can even remember how I did the movement with the microphone stand back then. That didnt really work that well, but hey, I was a kid back then. lol. Considering that this was the first time that I did this particular song I also remember how I didn't win the contest that time, but some organistion came back a couple of months later to ask whether or not I wanted to perform at their event... Go Figure!!! 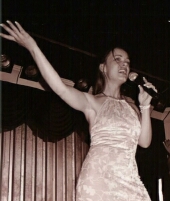 Either way, who would have thought that I would eventually end up making performing and singing my profession. Here's a picture of me at one of my shows. (click the thumbnail for a popup with a larger version.)
I guess this only goes to show that you shouldn't just give up on your childhood dreams so easily.

At least give it your best to make your dreams come true... they deserve it.